What youth movements & feminist movements can learn from each other

Nafisa: I started my career in feminist spaces and I’ve been so struck by the parallels found in the youth sector. Like feminist movements, youth movements are chronically underfunded, undervalued, and often an afterthought – or something to be mainstreamed after systems have already been created and hierarchies set. I didn’t know how advanced youth-led organisations were in their power analysis and demands for equity. Now that I have more exposure, it makes sense to me to create more cross-movement and intergenerational base-building.

For example, just like feminist analysis and critiquing heteropatriarchy, there is a built-in challenge to power when you work with youth-led organisations. Those who are traditionally thought of as “experts”, how “experience” is measured, how much you “trust”, compensation and funding, visibility, access – these are all intrinsic to working with youth movements. A lot of the challenges, delegitimisation, tokenism, even state-violence that young people experience, it’s all happening in feminist spaces too. However, I’m really seeing a need for the tactics, strategies and power-sharing models created in the youth space to better inform and challenge feminist practices (and certainly vice versa!). Of course there are feminist youth-led organisations, and feminist organisations that are intentionally intergenerational, but to me the silos are significant and still need to be broken down.

Jean: Another parallel I’ve seen is with the work that Restless does in supporting other organisations and funders on meaningful youth engagement as well as our own journey on becoming a more gender-transformative and feminist organisation. So much of it is about institutional challenges, and what it takes to have institutional change. When we work with a partner who wants to improve how they’re engaging young people, we help them assess what is going well, what else have they tried, where do they want to go? And we have principles and frameworks we can apply to help them develop action plans. We’ve needed the same types of tools on our own journey to become feminist. And I think that’s probably true of a lot of organisations. For feminist movements and organisations – how are they including younger generations in their work, and what is the power dynamic? There’s a lot we could learn from each other.

“In order to break that silo between youth and adults, older folks need to share power, change how they operate and build internal culture, and be open to learning from younger people.”

Nafisa: Also, for me feminist leadership is as much about collective power as it is about individual empowerment and traditional “leadership”. In feminism, instead of exceptionalism or cherry picking the loudest, most well-spoken person in the room, we know that there needs to be real accountability to communities, networks of care and safety, democratic and accessible spaces to co-lead in. Despite this, feminism is often competitive, especially if it is about speaking very well in English or being charismatic. Charismatic leadership models are still super prevalent, right? Similarly, in youth spaces we often go to exceptional youth who have relative power already.

That’s when I think of the revolutionary role of mentorship and breaking down competitive and individualistic ways of gaining traction and influence. Mentorship can open doors and destroy bottlenecks, and create meaningful ways of engagement. I’m talking of course about dual-mentorship, because in order to break that silo between youth and adults, older folks need to share power, change how they operate and build internal culture, and be open to learning from younger people.

“We should be inviting [youth]– as founders of organisations, as movement leaders, as researchers – as equal partners at the table to shape and inform decisions.”

Jean: Through my own experience and journey in the youth sector I’ve seen an evolution when it comes to mentorship and power sharing. When I was just starting out in the youth sector – and young myself – I was fortunate to have bosses and more senior colleagues who gave me a lot of responsibility and trusted me with it, while supporting me with their experience and connections. But back then – 10-15 years ago – we still had a long way to go. As a young person working in the sector where we were advocating about the importance of young people, we were still talked about much more than we had leading roles and opportunities for our voices to be heard. And so to see the evolution now where it’s unfathomable to think that you’d have an event about young people where young people wouldn’t be front and center – I realise how far we’ve come. But we still have much farther to go. Too often young people are still included only for tokenised participation, invited to share their ‘inspiring story’ or asked on short notice and without much context to give their perspective that’s supposed to represent the ‘youth voice’.  Instead we should be inviting them – as founders of organisations, as movement leaders, as researchers –  as equal partners at the table to shape and inform decisions.

I completely agree about the need for dual mentorship, especially if you’re working in the youth sector. I think about myself and how much I’ve learned about management, problem solving, negotiating, etc. that I didn’t know 15 years ago. But as we get older, we can also get really out of touch quickly and our work should be shaped by young people. And so if you’re not being mentored by young people, you’re at risk of not being relevant. I’ve been doing this informally, but for the past six months I’ve formalised a dual mentorship with a founder and leader of a youth-led organisation where we meet quarterly and exchange advice and insights. I’ve found it incredibly useful!

“I love seeing rotating CEOs and Directors in youth organisations whereas some feminist organisations have the same founders leading for 40 years!”

Nafisa: I think in my career, I’ve just noticed that young people really make organisations run. Like, if you think about programs, substantive work, partnership and coalition building, that’s all probably being done by people under 35, and yet they don’t get the formal recognition and benefits their labor deserves. I’ve noticed that young people working in traditional adult-led spaces become experts in negotiating and even manipulating existing power structures informally, because formal power isn’t handed to them as freely.

For our work, we are always thinking about it. Like, how do we get young people into formal decision-making spaces and leadership? How do we retain talent and ensure mobility and compensation? How can we co-create proposals and co-design budgets? There’s a real investment in “process” that I’ve found totally inspiring having worked in the youth sector, that I think can be strengthened in feminist spaces.  Feminist organisations are already doing that work, but in a way, youth movements have been at the forefront of it by nature of them being younger and always battling for a seat at the table.

“Adequate and fair compensation is a major new frontier in valuing youth power and shifting power.”

Jean: I always like to say that at Restless Development we really are restless – we do a lot of self examination and make improvements when we need to. We realised that as we grew and evolved our staff on average got a bit older than they were before. In particular young people weren’t getting into management levels or in senior leadership. Yes, they’re on our boards as equal members and they’re running our programs, but they weren’t in middle and senior management enough. And so we took steps to rebuild some structures, recruited young people directly onto the senior leadership team (who are additionally compensated for those roles), and also are building leadership pipelines and training programs so that young people from across the global agency have more access and opportunity to transition into leadership roles. It’s important for us, just like any organisation, to stay vigilant and make course corrections as needed.

But I wanted to go back to your point that resonated with me about how young people really power and drive so many organisations. I think that’s probably true in any sector – public, private, nonprofit. Young labor power not only doesn’t get appreciated enough, but I think it can be exploited too, right? They’re probably the lowest paid, but how many hours are they putting in? And there are leaders who think, oh we’ll get a young person who’s really hungry for this and they’re going to give it their all (meaning, go way above and beyond in workload and hours), but they’re not getting compensated as much. And then of course in so many roles young people are expected to participate in something and not be compensated at all because it’s just supposed to be a ‘good opportunity for them.’ The assumption is, they’re young, so they just need professional development opportunities and any chance they get to brush virtual shoulders with others, and so they’ll take it. Adequate and fair compensation is a major new frontier in valuing youth power and shifting power.

Nafisa: I’m all for it. I think to summarise, there are real silos that exist between youth movements and feminist spaces. Mentorship rooted in power-sharing as well as the tactics, policies and equity that youth movements have been experimenting with and designing can really support greater representation and equity in feminism and the social change sector at large. Feminist organisations need to build their base with more young people as co-leaders and not followers; and in turn, youth movements could be thinking more intersectionally as feminists. We all need to be building that atypical and collective leadership, the unlikely partnerships, and intergenerational relationships where we can challenge each other.

Restless Development is a Committed Organisation

28 international social impact organisations like CARE International, Oxfam International and Amref Health Africa have made the FAIR SHARE Commitment. In doing so, they pledge to participate in the annual FAIR SHARE Monitor and achieve gender equity in their leadership by 2030.

Do you want to join this community of frontrunner and exchange learnings on Feminist Leadership and gender equity? 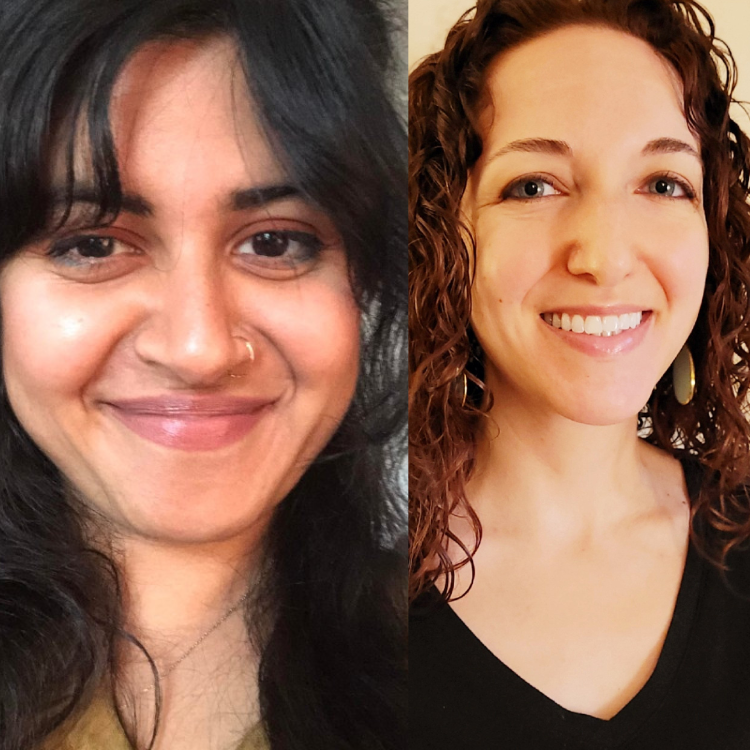 Nafisa Ferdous (Senior Manager of Advocacy & Programs) and Jean Manney (US Director) work together at Restless Development, the global agency for youth-led development.

A new partnership with the Patrick J. McGovern Foundation Jan 26, 2023,
Making the Monitor more gender-inclusive Jan 24, 2023, By
Beginning our co-leadership journey Jan 24, 2023, By Lisa Tatu Hey and Helene Wolf
Feminist recruitment 2.0 Nov 24, 2022, By FAIR SHARE team
The sabbatical effect Sep 26, 2022, By FAIR SHARE team
We use cookies to ensure that we give you the best experience on our website. If you continue to use this site we will assume that you are happy with it.OkNoPrivacy policy
You can revoke your consent any time using the Revoke consent button.Revoke consent