“A little revolution, yet the new normal”

Last week, I stumbled upon a tweet from the new President of the European Commission, Ms. Ursula von der Leyen, who said, “As the first woman to be the Commission’s president, every Member of my College will have a gender-balanced Cabinet for the very first time. By the end of our mandate, we’ll have gender equality at all levels of management for the very first time. This will change the Commission’s face”. She went on adding, the following week “[…] It is a little revolution at that level. At the same, this must be the new normal – this shouldn’t even be an issue.”

This totally resonated with me and made me realize that we were definitely going through a revolution, silent yet loud, normal yet extraordinary.

When I started working on the implementation of the Youth Chamber of Commerce in my native country of Mauritania, I did my best to balance as much as possible the genders and ethnicities within the team, not only because it is the true representation of Mauritanian diversity, but also because I was afraid we would fall into the trap of most organizations I was seeing in the landscape. We founded the Youth Chamber of Commerce in late 2012 with the aim to provide capacity building to young entrepreneurs and promote women economic empowerment. We opened an incubator in 2016, in partnership with the National Bank of Mauritania, that provides a co-working space, tailored programs for start-ups, and most importantly, bridging their everlasting financing gap.

I was lucky enough to team-up with a group of extraordinary young women and men, who became family along this journey, implementing an idea most people did not believe in, into an organization that shaped the Mauritanian entrepreneurial culture. Our team experienced gradual changes, with the leadership team today being 80% female and our programs increasingly gender-sensitive. This venture had a double objective for us – we clearly wanted to contribute to building our community as young Mauritanians full of energy and ideas who had had opportunities, we were grateful for. The motto “to whom much is given, much is required” made perfect sense to us. Going against odds and fulfilling our vision was part of the thrill. It was everything but easy, especially for a women-led organization in a male-dominated environment, where ethnicity most of the times defined one’s character and where gender was merely chromosomal and societal constructs. When you’re a 25-year old, oblivious to these concepts and inhibitions, people often see you as a circus or just a person with spare time on her hand. None of these applied to us obviously, as they came to realize with time.

As a young Muslim African woman with a voice, not afraid to be heard, I am comforted by the normality around it. We are not the exception anymore; we are part of a movement that is defining the new normal. It matters at every level. Taking time to celebrate small victories is very important, for it keeps the motivation and encourages oneself to aim higher and better. I am very proud of this revolution that is being normalized, striving to reverse the tendency and put forward the image of a new normal that is more easily accepted.

It takes a village. Feminist circles, such as FAIR SHARE, are an important component of the village that widens one’s perspective on the issues we are handling daily, enabling me to learn from peers and mentors and bring Mauritania to the world. I am happy to be part of a village that is sharpening my definition and practice of leadership, as it evolves. 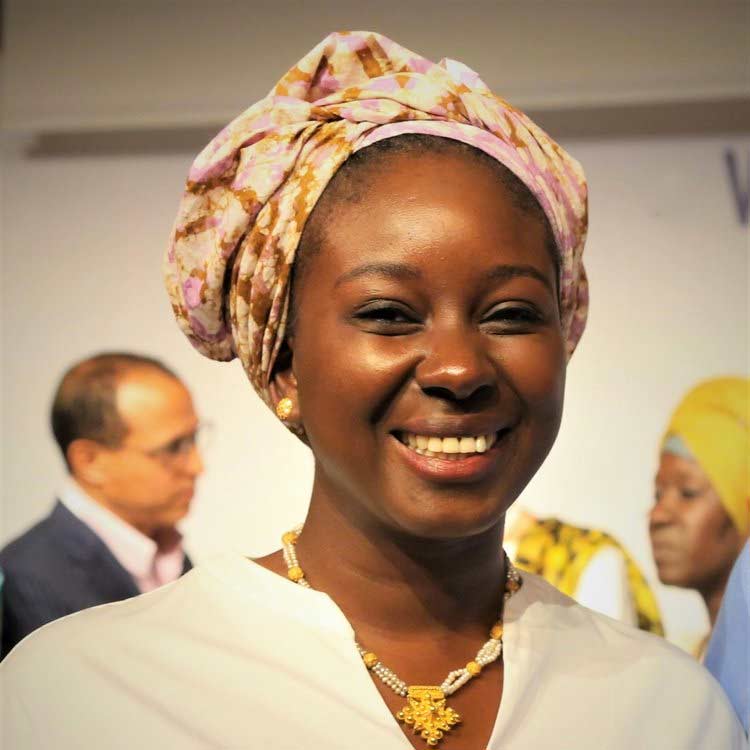 Aïssata is the co-founder and President of the Youth Chamber of Commerce of Mauritania, an organization created in 2013 with the mission to bridge the gap for young Mauritanian Professionals and Entrepreneurs. Their organization has had a major impact on the ecosystem, through the i-Lab, an Innovation Lab and Venture Fund, created in partnership with the National Bank of Mauritania, to fund start-ups and strengthen the ecosystem for women entrepreneurs struggling to access funding for their business ventures. A Mauritanian National, Aïssata has a background in agricultural finance and Microfinance, working for the Food and Agriculture organization on Productive Safety Nets Projects in the Sahel region, as well as African Risk Capacity, an institution of the African Union, working on Disaster Risk Financing for West and Central African Countries. Besides her work in development, she is passionate about youth and women empowerment matters on the continent; she participated in several task groups on peace, stability and women empowerment in the Sahel Region with UN Women, the European Union and the US Government. She recently was appointed by President Emmanuel Macron on the Gender Equality Advisory Council for the G7 to advise on matters related to girl’s education, gender-based violence and women's economic empowerment, specifically in Africa

Taking a step towards intersectionality Feb 11, 2021, By Lisa Hey and Sophia Seawell
Productive discomfort: why we built the FAIR SHARE Monitor Jan 25, 2021, By Sophia Seawell
My journey with the FAIR SHARE Action Circle Oct 15, 2020, By Serap Altinisik
The Missing Conversation on Civil Society Leadership Sep 15, 2020, By Mouna Ben Garga and Safia Khan
The Future is Feminist… are you on board? Jun 23, 2020, By Anusha Bharadwaj
We use cookies to ensure that we give you the best experience on our website. If you continue to use this site we will assume that you are happy with it.OkNoPrivacy policy
You can revoke your consent any time using the Revoke consent button.Revoke consent